Intestinal bacteria may play a role in the development of motor neuron disease, also known as amyotrophic lateral sclerosis, as initial studies suggest.

Tests in mice showed a change in their levels of intestinal microbes before the symptoms of paralyzing disorder appeared.

Some bacterial strains accelerated the progression of the disease. The abundance of others declined as the disorder took hold.

Replenishment of the levels of a strain improved symptoms and prolonged survival in mice with ALS.

There is no cure for the cruel condition that killed Professor Stephen Hawking, but experts believe this is a step forward, even if it is small. 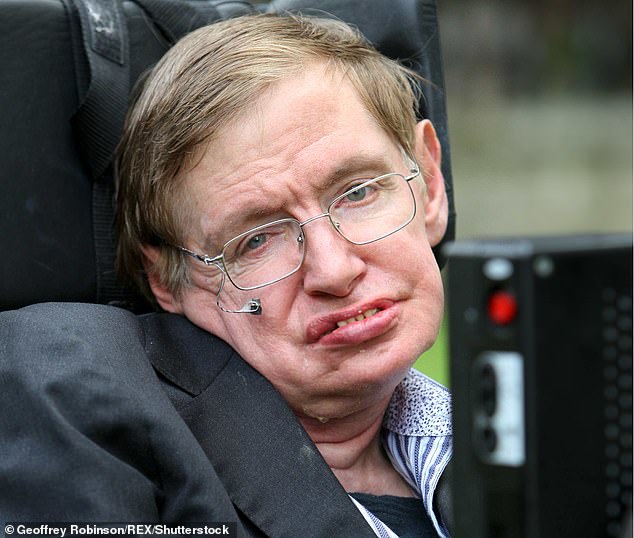 Early studies reveal that intestinal bacteria can play a role in ALS, a disease of motor neurons, by accelerating progression. The cruel condition that killed Professor Stephen Hawking, in the photo.

Researchers at the Weizmann Institute in Israel modified the genetics of the mice so that they had ALS.

Their symptoms worsened when they were given antibiotics that eliminated their intestinal bacteria, suggesting that the alterations in the intestine were related to the disease.

When the researchers compared the intestinal bacteria of the diseased mice with normal mice, they were able to identify different intestinal strains.

They noted that 12 different species were found in higher or lower numbers in diseased mice, reports the BBC.

Researchers led by Dr. Eran Blacher isolated the strains and administered them one by one, in the form of probiotic-like supplements, to ALS-prone mice.

Some of the strains, such as the pair of Ruminococcus and Parabacteroides distasonis, made the disease more serious.

But one strain, Akkermansia muciniphila, significantly slowed the progression of the disease and prolonged the life of the mice.

To reveal how A. muciniphila produced its effect, the scientists examined thousands of small molecules secreted by intestinal microbes.

They focused on a molecule secreted by A. muciniphila, called nicotinamide (NAM), according to the results published in the journal Nature.

The scientists injected the ALS-prone mice with NAM, and their condition improved significantly.

It is believed that NAM works by reducing oxidative stress, which can lead to tissue damage, preserving neurons in the brain.

Professor Eran Elinav, one of the researchers involved in the study, described the findings as "very exciting."

Although the researchers emphasize that their findings are preliminary and that much more work is needed, they said it could be applicable to human patients with ALS.

WHAT IS ALS, THE DISEASE THAT KILLED PROFESSOR STEPHEN HAWKING?

The British physicist, who died on March 14, 2018 at the age of 76, was confined to a wheelchair from the age of 20 due to a form of early-onset early-onset motor neuron disease: sclerosis Amyotrophic lateral (ALS).

He lost his ability to speak in 1985, but a voice synthesizer allowed him to keep communicating, he wrote 15 books and starred in the Simpsons and Star Trek.

He was the second high profile ALS patient after Lou Gehrig, the baseball player who catapulted the disease to the public.

Hawking was a kind of medical wonder because he lived with the disease for much longer than expected.

The disease is a rare condition that progressively damages parts of the nervous system.

It occurs when specialized nerve cells in the brain and spinal cord called motor neurons stop functioning properly, which is known as neurodegeneration.

There is currently no cure for motor neuron disease.

The treatment aims to make the person feel comfortable and have the best possible quality of life.

In a small study of 37 patients with ALS and 29 controls, the authors also observed a change in the composition of intestinal microbes and reduced levels of NAM.

They say that these preliminary human findings are not enough to constitute a treatment recommendation.

ALS is a neurodegenerative disease that affects the muscles used to walk and talk. Patients have a life expectancy of around three to 10 years.

But the world-renowned physicist, Professor Hawking, lived with the disease for more than five decades before his death in 2018.

The cause of ALS is unknown, but scientific studies suggest that both genetics and the environment play a role in development.

He said: & # 39; There is growing evidence from a wide variety of sources that bacteria in our intestines can play a role in a wide range of neurological conditions.

"Although ALS has not been studied as much as other conditions such as multiple sclerosis, Parkinson's disease, Alzheimer's disease and strokes.

"These are important new findings that support the theory that certain bacteria can play a disease-modifying role in ALS.

"This adds to an emerging, but still blurry, image of a different metabolism that seems to occur in people with ALS."

Dr. Dickie added: "Diet and exercise are also being studied as potential factors badociated with the disease."

According to CDC calculations, almost 15,000 Americans have ALS and approximately 5,000 in the United Kingdom live with a motor neuron disease, according to the NHS.