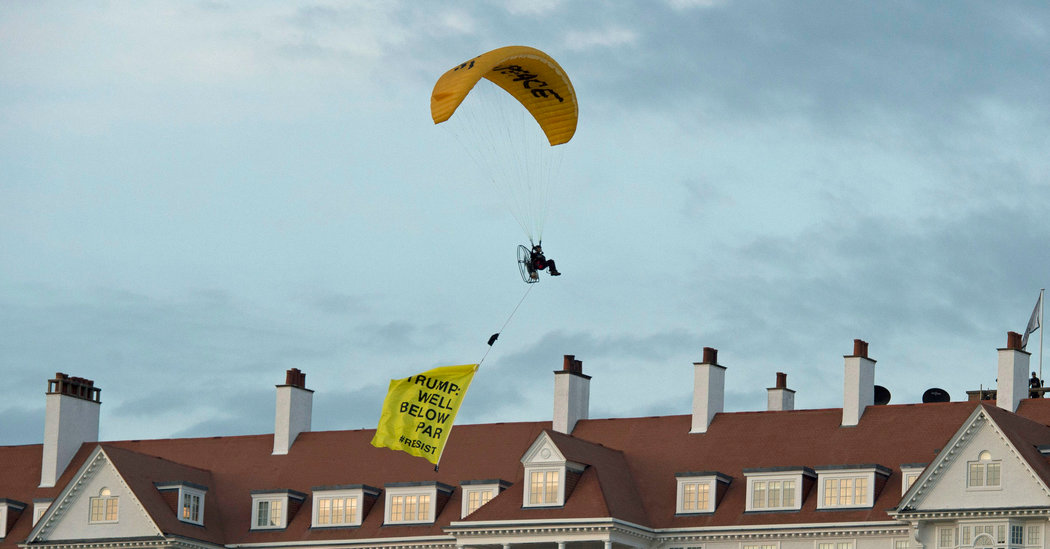 LONDON – Police in Scotland arrested a 55-year-old man in connection with a paragliding demonstration scheduled to coincide with the arrival of President Trump on Friday night of a golf weekend.

Video shared by journalists on social networks and by the website of the environmental group Greenpeace UK . He showed a paraglider unfurling a banner that read “Trump Well Below Par” as the president and his entourage meditated on the entrance to their Turnberry golf resort.

On his website, Greenpeace UK wrote: “We have come to @realDonaldTrump, where it hurts, on his golf course, Trump does not believe in climate change, he took the United States out of the Paris Agreement and is committed to burn more climate destroyer coal, we could not let it escape with a quiet game of golf … #resist “.

The actions of the paragliding took place before thousands of protesters took to the streets of Edinburgh, the capital and Glasgow on Saturday to demonstrate against the US president. , hoisting balloons “Trump Baby”, singing slogans and carrying banners with the legend “Dump Trump”.

Spent the weekend in Scotland before traveling to Finland for a meeting on Monday with President Vladimir V. Putin of Russia.

Assistant Police Chief Mark Williams said in a statement: “Around 2,000 people were in Glasgow and about 250 were in Dundee on Friday night, and another 9,000 marched and participated in a rally in Edinburgh today.” Thousands of people had shown up across the country.

When Mr. Trump headed to one of his golf courses on Saturday, surrounded by a phalanx of security officers, a group of nearby protesters launched a barrage of songs, inc. luding, “No Trump, no K.K.K., no racist U.S.A.”

Scottish police said on Saturday they were chasing a paraglider that had breached the no-fly zone over the complex. On Sunday, they said in a statement that “a 55-year-old man has been arrested and has now been charged in connection with an incident when a motorized parachute was blown up in the vicinity of the Turnberry Hotel.”

Police said the suspect, whose name was not revealed, would appear at Ayr Sheriff Court on Monday. No more information was published, including possible charges.

A Greenpeace spokesman confirmed on Sunday that an arrest had been made, but declined to comment further.