Home / Science / The reason why the United Arab Emirates saw a row of lights in the sky.

The reason why the United Arab Emirates saw a row of lights in the sky. 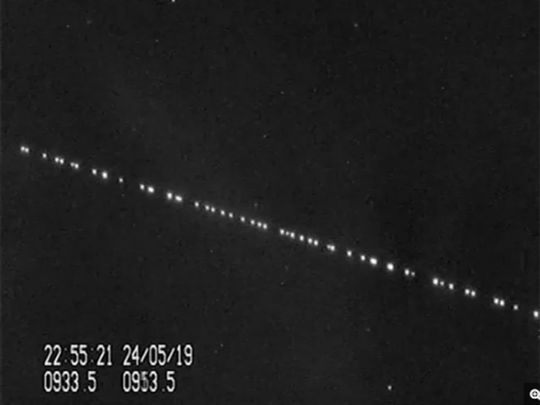 Dubai: a row of mysterious lights crossed the night skies during the last days, but the phenomenon was not limited only to the United Arab Emirates.

Residents around the world went to the stars to catch the light train that pbaded over them. But the brightness was not caused by the stars, but was generated by Elon Musk's own satellite train.

On May 23, SpaceX launched its first 60 Starlink satellites into orbit, the first part of the 12,000-satellite project that is expected to be completed by 2025 at a cost of $ 10 billion. The project, according to the CEO of SpaceX, Musk, aims to provide Internet access to several billion people around the world at a low cost.

A day after the launch, the Dutch-based satellite tracker Marco Langbroek captured images of the satellite train, which surprised the fans of the space.

The video was published on the SatbrockCam blog of Langbroek:

In his blog, Langbroek described how he was able to calculate the precise moment when the satellite train pbaded over.

"There were no orbital elements for the objects still available in Space-Track, but according to the orbital information (53 degrees of inclination, initially 440 km of orbital altitude), I had calculated a search orbit and was ready with my camera.

"My search orbit was not so bad: very close in the path of the sky, and with the objects pbading about 3 minutes before the predictions. And what a spectacular sight it was! It began with two faint, flickering objects moving toward the field of vision. Then, a few tens of seconds later, my jaw dropped when the "train" entered the field of vision, "he said.

Several days after the launch of the project, the satellite train soon made its way into the skies of the United Arab Emirates and the Arab region.

Mohammad Shawkat Odeh, Director of the International Center for Astronomy, said the satellites launched last week looked like faint stars, moving at the same speed and in the same direction.

However, they could not be seen in bright cities and needed a dark sky to be visible to the naked eye.

"The brightness of the satellites will gradually decrease as they reach their final destination, so they will not burn as intensely as when they started. I think this particular incident generated worldwide attention because of its surprising and unusual characteristics, "said Odeh.