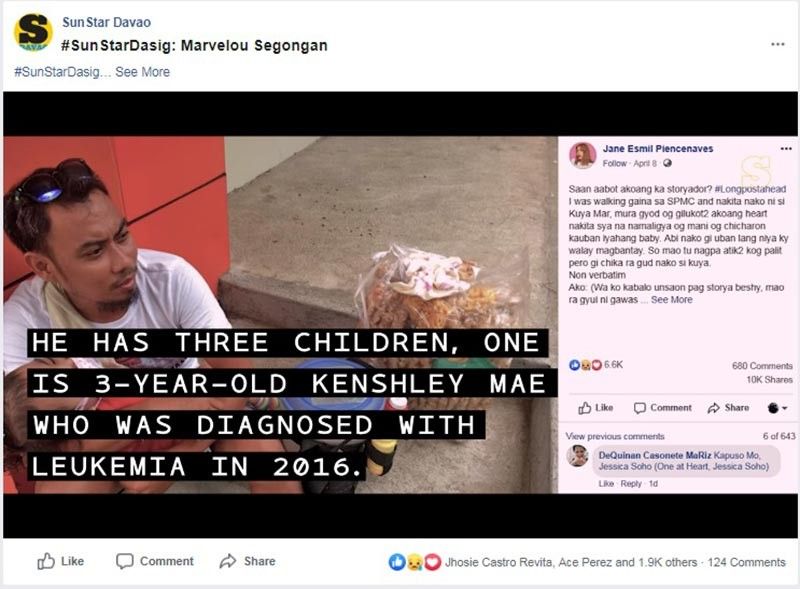 Since SunStar Davao began using social networks to bring stories closer to more audiences, he has shared a variety of stories that went viral over time.

By sharing photos and videos of Dabawenyos and Davao City, it has become a way of listening to people's inspiring stories and the beautiful aspects of the community in which we are.

These are the main trend posts on the SunStar Davao Facebook page this year as of August 31, 2019:

If you are in their situation, would you do the same? In the episode of #SunStarChitChat, the boy from "Food is Life" Eujay B. Regner told the story behind his viral photos. Photos of him bringing his plate of food and eating while firefighters try to control a fire in a shopping center became viral on social media. Like the people who shared, reacted and commented on the photo, we would also like to know why he brought his plate of food. Therefore, we contacted to know the story behind this viral photo.

Joenel Malanog is an inspiration worth emulating. He owns an honesty store at the University of the Southeast of the Philippines. He is doing this in order to support his studies at school. We were captured by the story behind why he is doing this and we present him in an episode of SunStar Dasig.

The man in the viral photo that sells peanuts and chicharon outside a hospital in Davao City is Marvelou Segongan. Behind his smiles and positive aura is his daily struggle as the father of a patient with leukemia.

On August 30, messages and screenshots of a child dying of meningococcemia were shared from one person to another. Many sent messages to SunStar Davao to verify if these messages were true. We contacted Dr. Julinda Acosta, head of the technical division of the Davao City Health Office, to answer questions from the public. It diminished the fears of the public and clarified the erroneous information that was disseminated online.